Once Upon a Time in Baghdad
by
Margo  Kirtikar  PhD

available at
amazon.com
and Margo's website
http://www.margokirtikar.com
If you are interested in how life was in the Middle East before the Islamist and their supporters' wave took over with their destructive methods? Do you want to know more about the background of the conflict in the Middle East?  Much history is conveniently forgotten.  This book will bring back some happy memories of a cosmopolitan vibrant time in Baghdad,Iraq and also in Damascus, Syria when people of all backgrounds, cultures and beliefs lived and worked side by side in peace.
This information is interwoven into my story of the first two decades of my life.
A different viewpoint from a young Christian woman's mind. One of the few last survivors of her generation.
Photo below family in Baghdad, Taq Kisra, ca. 1955 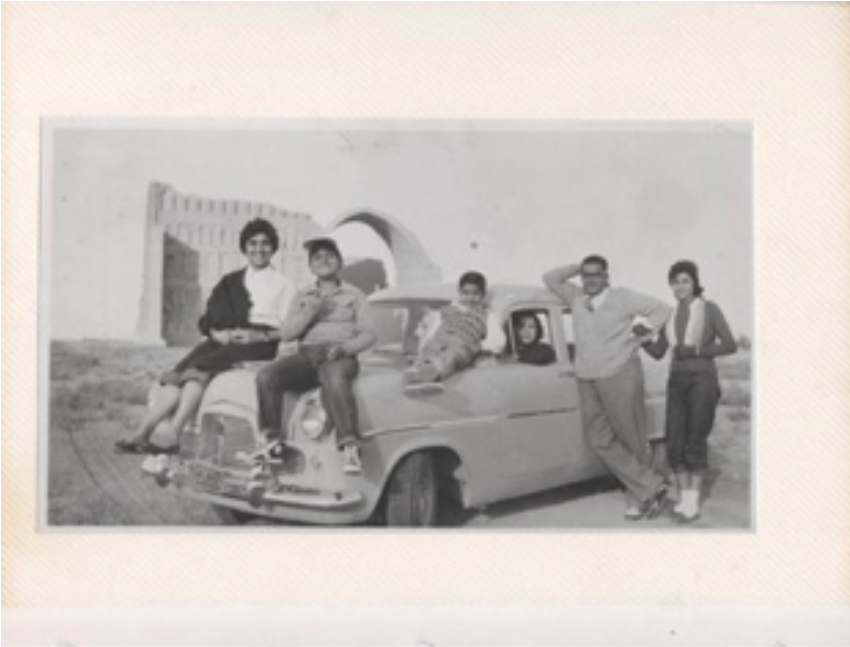 Once Upon a Time in Baghdad consists of a series of voices that join into a colorful mosaic about life in Baghdad as it once was and could be again. Seen through the eyes of a young Christian woman the Baghdad of the nineteen forties and fifties is interwoven with flashes of the recent events of war struggle and occupation, then again historical stretches are inserted telling of the Arab heritage in grand sweeps. The storytelling format is non linear, the different fragments however create a weave not unlike the intricate patterns of an oriental carpet with foreground and background merging and alternating, in a dance of different colors, voices and intonations.

The young woman's Baghdad is a multicultural city, with a life rich in different trajectories merging. Christian, Jewish and Moslem life interweave as she herself offspring of Indian and Syrian parents, a not uncommon cosmopolitan figure in an Arab city rich with influences, cultures and traditions meeting in ways that are familiar but also different. It shows a way of life which in the Middle East has sadly vanished and given way to increasing monochrome tendencies.

Her close-ups of life of the Baghdad of that time are intimate memories triggered by the onslaught of the invasion of Iraq. Long seemingly lost voices come alive, painting portraits of the city, family life, customs and cultures. A young woman's coming of age in the Arab world is charmingly sketched, French Convent School, the Indian community in Baghdad, peaceful upper middle class everyday life is shown in its familiarity and self understoodness. Then again this world is set within historical developments and political interests of European and American powers in the Middle East, where the larger picture is drawn. The jump in scale continues with even larger sweeps of a cultural background drawn back to the Assyrians, the Golden Age of Baghdad until an intricate palimpsest holds the various pieces as a journey into the past with an eye on the present and a hope for the future of Baghdad, that it may become once again a blooming multicultural hub open and vibrant to the world and its inhabitants.This book is a must read for all those interested in the multi-layered past and potential of a beautiful Arab city Baghdad.  Gabrielle von Bernstorff

Copyright 2011 - 2022  Once Upon a Time in Baghdad by Margo Kirtikar Ph.D. Switzerland
http://www.margokirtikar.com
http://www.cosmicanduniversallaws.com
​